Adam T. Bernard is a potter, calligrapher, conservator and mounter of Chinese calligraphy, paintings and folding fans, who has lived and worked in Taiwan for 11 years. He has  studied and conducted research in ceramics in Uji Japan at the Ashahi Kiln, and has recently set up his Studio in Santa Cruz, CA.

He has shown his work both in Asia and NYC, most recently at the World Financial Center in NYC, and various group shows at the White box gallery and Castleton gallery.

He is the disciple of the third generation master potter Weng Guo Zhen 翁國禎, and spent 5 years working in the pottery town of Ying Ge under his master’s instruction.

In spring 2008, Adam Bernard was given the name Xiang He Shan (Harvest Mountain), by his teacher in recognition of his skills and his joining the lineage of Wong family potters as an official disciple. He signs all of his work using this name.
In Spring 2009 he studied ceramics at the Asashi Kiln in Uji, outside of Kyoto and traveled to many of the ancient kiln sites Mino, Bizen, Iga and Shigaraki, conducting research into glaze and firing techniques. 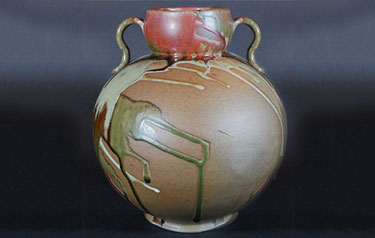 He began his training under teacher Li in Pan Chiao, Taiwan in the spring of 2000 and has been practising everyday since. He has been greatly influeneced by Wang Duo’s cursive, Huai Su’s “crazed cursive” and Qi Bai Shi’s small seal script. He was greatly influenced by his friend and neighbor in Ying Ge Taiwan “Su Dong Po” (teacher Ke), who is one of the top calligraphers and ceramic cobalt blue under painters in Taiwan.

“After spending 10 years studying, researching, wrighting and painting in the traditional styles of Chinese ink painting and calligraphy,” explains Adam Vernard, “I was told by a friend that I would never be considered a ‘calligrapher’ because I wasn’t Chinese. It felt like a great weight had been lifted off my shoulders. I no longer had to follow the strict, narrow views of how a word should be written and what it should mean. I no longer had to squeeze myself, into the ever crouwded and shrinking box of ‘traditional calligraphy.’ Instead I could go off on my own and draw from my American and western heritage of painting and mixed media and walk on my own path, that of abstract expression calligraphy, drawing upon all that I have learned and studied before, or as I once wrote “following in the footsteps of the ancients, I must go beyond their words and deeds.” 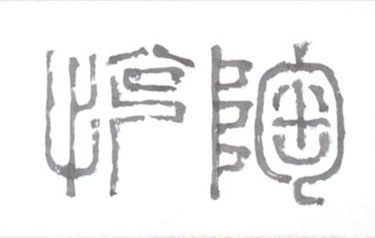 When Adam T. Bernard first arrived in Taiwan in the fall of 1999, he began to study calligraphy and painting which lead him to the art of scroll mounting, and his work as a conservator and mounter for various private studios in Taiwan. He mounts all his own work in Chinese, Japanese and modern styles, and he has studied under and worked with Gu Xiang Mei of the Freer/Sackler Gallery at the Smithsonian in Washington D.C. and Ye Zhi Ming of the Palace Museum of Taiwan. 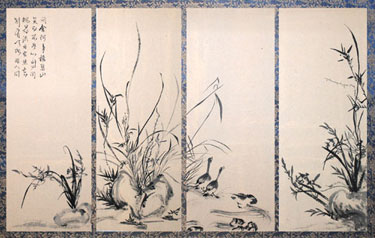 Adam T. Bernard thows a variety of forms, makes and fires his own glazes and seeks inspiration from the mountains behind his house, Tai Ji and from the “way of tea.” He has been an avid tea drinker all his life and moving to Taiwan allowed him to research the beginning of drinking tea in the Tang Dynasty in China as well as the formalization of the tea ceremony as conducted by Chan monks in the Song Dynasty.

He has studied both the traditional Taiwanese way of preparing tea as well as taking classes in Japan at the Urisenke school in both Tokyo and Kyoto. 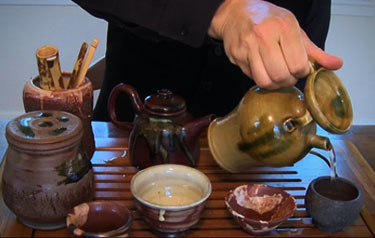